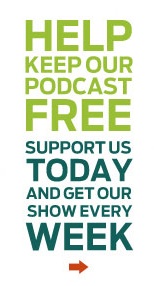 Twice a year, I ask you to help cover the cost of producing the show and getting it to you over the internet. This past year we've done all sorts of ambitious, new things on the show, and I hope you liked it enough to consider pitching in a few bucks. There were the incredibly labor intensive, full-hour investigative stories about the horrifying problems in our patent system, and about fracking, and about a Georgia Judge named Amanda Williams (who by the way has stepped down from the drug court bench and is set to go to trial in January for many of the things we discovered and reported). Also, there was the amazingly fun hour we did at amusement parks, the Incredible Case of the PI Moms, and the show we did at the request of a 14 year old, all about middle school. And many more. All of this takes people and money to produce. It costs our home station WBEZ $120,000 just to pay for the bandwidth to get these shows to you over the Internet. If you are listening and not donating you are costing WBEZ money. It used to be, I'd come on the show for four weeks in a row in December, asking for donations. This year, to cut down on the interruptions, we're trying a thing where we only ask for one week. This is that week. But for it to work, I need you to donate now, either here on the web or via text. If you text the letters TAL to the number 25383, and a $10 donation will be added to your phone bill (message and data rates may apply). People sometimes ask me if it’s frustrating, having to request donations directly from listeners. It’s not. It’s the fairest way to fund anything: the people who like these stories and want them to exist, we pitch in a few bucks. I hope you like them enough to pitch in. Thank you,
Ira Glass