3/16/2012 UPDATE: This American Life has retracted the episode referenced below because we learned that many of Mike Daisey's experiences in China were fabricated. We produced an entire new episode about the retraction. 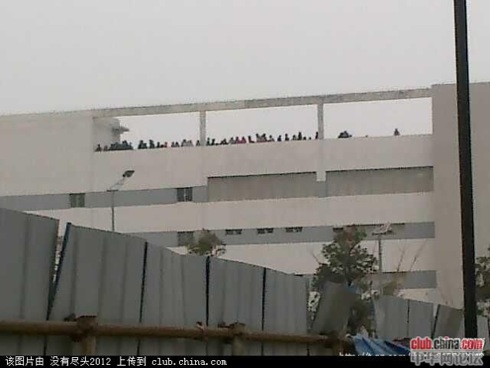 After our episode "Mr. Daisey and the Apple Factory" aired this weekend, reports started coming out about a worker standoff at a Foxconn factory in Wuhan, China. Foxconn manufactures products for Apple and many other electronics brands, and in our episode Mike Daisey tells stories he heard from the workers he talked to outside the gates of a different Foxconn plant, in Shenzhen.

According to news accounts, last week about 150 workers in Wuhan went to the roof of the Foxconn building for two days and threatened to commit mass suicide. Some reports put the number of employees at 300.They were upset because the company had moved them to a different production line.

"We were put to work without any training, and paid piecemeal," UK paper The Telegraph quotes one worker as saying, anonymously. "The assembly line ran very fast and after just one morning we all had blisters and the skin on our hand was black. The factory was also really choked with dust and no one could bear it."

According to the Telegraph report, the employees were being moved to a new line manufacturing computer cases for Acer. The article goes on:

"Because we could not cope, we went on strike," said the worker. "It was not about the money but because we felt we had no options. At first, the managers said anyone who wanted to quit could have one month's pay as compensation, but then they withdrew that offer. So we went to the roof and threatened a mass suicide."

Foxconn has a history of workers jumping off its buildings. When Mike Daisey was in China in 2010, Foxconn made international news over the course of several months as about a dozen workers jumped off the Shenzhen plant individually and killed themselves. One of Foxconn's responses was to put up large nets around its buildings.

We reached out to Foxconn about the suicide threat last week, and the company said that early in the morning on January 4th, about 150 employees staged a "workplace incident" at the Wuhan plant after Foxconn told them they would be transferred from one production unit to another. Foxconn sent us the following statement:

The incident was successfully and peacefully resolved later that morning after discussions between the workers, local Foxconn officials and representatives from the local government, including the labor department. As part of the agreement between Foxconn and the employees in question, 45 of those employees chose to resign from the company under the terms of a voluntary resignation agreement and the remaining employees chose to remain as Foxconn employees. The welfare of our employees is our top priority and we are committed to ensuring that all employees are treated fairly and that their rights are fully protected. The operational changes that were the basis for this incident are being carried out in accordance with all relevant laws and regulations.

This is actually the first time Foxconn has responded to us. We asked the company repeatedly to comment on Mike Daisey's findings, both on and off the record, and each time they either declined or didn't get back to us. 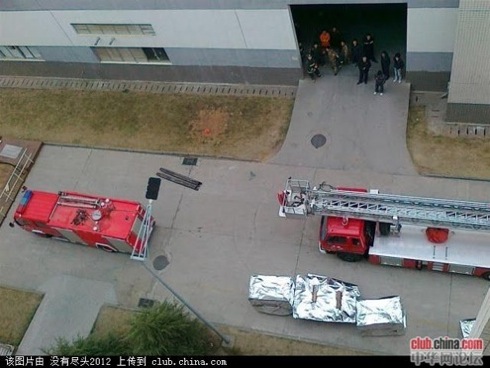 More photos of the protest here, which are fascinating (though a warning: one of the photo sites requires login and the other has some mildly NSFW ads).