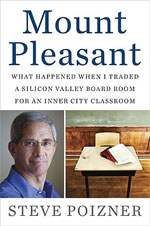 In our story about California Gubernatorial Candidate Steve Poizner, we mentioned questions about sales figures for his book Mount Pleasant. Just after its release, Poizner's book shot to No. 5 on the New York Times Best-Seller List.

During his interview, Ira Glass asked Poizner if he or the campaign had bought a bunch of copies of the book to boost sales. At that time, Mr. Poizner confirmed that the campaign did buy copies for supporters, but said he could not provide a specific number. He then told Ira his campaign would make the figure available.

After the interview, a few things happened. Mount Pleasant dramatically dropped to No. 33 on the very next New York Times Best-Seller List. As instructed by Mr. Poizner, we asked the campaign how many copies it purchased, but the campaign declined to provide a number.

Then, Malcolm Maclachlan, a reporter with Capitol Weekly—a paper focused on California politics—sent us a story he wrote after hearing our story about the controversy surrounding Poizner’s book. Looking into sales of Mount Pleasant, he found some very strange things—things that raise more questions about book's brief rise onto the best-seller list.

In his article, which you can read here, Maclachlan reports that a significant number of people seem to have inexplicably received copies of Poizner's book. One college student in San Diego named Matthew Donnellan says he was confused when he received a copy of Mount Pleasant. Donnellan got more confused when he looked to see who paid for it.

…[He] noticed that his name and address were listed not only as the recipient but as the buyer on the invoice. Wanting to make sure his credit card number hadn’t been stolen, he called Amazon. The Amazon representative he reached told him the book was purchased with a gift card — and that card had also been used to buy copies of "Mount Pleasant" for 249 other people, all of whom had first names that began with "M."

Maclachlan reports that the gift card appears to have been purchased under a fishy name by someone affiliated with a book promotions company called ResultsSource.

The implication is that the company may have disguised a large promotional purchase of the book by using gift cards to buy copies for large numbers of individuals on a mailing list.

This is interesting because leading entities that rank book sales make an effort not to count bulk sales in their rankings. The idea is to prevent promotions companies and authors from buying a bunch of copies and forcing their book onto best-seller lists. Sales that appeared to go to individuals through a retailer like Amazon, however, would be counted. Those are the kinds of sales that determine a book's sales figures and ranking.