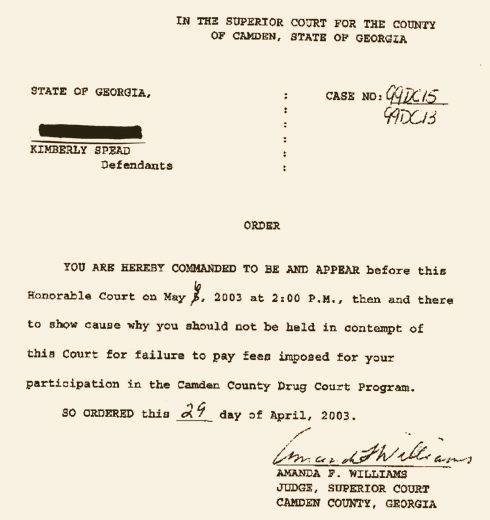 This is another interesting case.

Kimberly Spead declined to talk to me but I got her story from court records and from the transcript of an interview she did with lawyers who were investigating Glynn and Camden County drug court practices back in 2005.

Kim was a successful graduate of Judge Williams' drug court program. It took her three years and five months and she finished in January 2002. During Kim's time in the program, the drug court raised the fees that participants pay. She said in the 2005 interview that she was told to sign a paper agreeing to the higher fees. She said she was told that if she didn't, she'd be ejected from the program and would have to serve the full sentence on her original crime. She felt that was unfair. She'd entered the program signing a contract that specified certain fees, and now the court wasn't sticking by the deal. She didn't want to sign. But finally, she signed.

And she never fully paid up. It isn't clear from court records how much she owed, but the likely amount seems to be about 1500 dollars. A year and a half later, push came to shove. She was summoned to court over the money on May 6, 2003. She didn't show up. A warrant was issued for her arrest. She ended up in jail in September 2003 (caught for something called a "theft by taking," she took her mother's car and her mother went to the police). She was denied bond.

She sat in jail for eleven months. Her theft by taking case was resolved in nine and then she waited to deal with her drug court charge. During that time, Kim claimed in that 2005 interview, she repeatedly made written requests to see a public defender and gave those to jail officials, but nothing happened.

On August 5, 2004, eleven months after she was arrested and put in jail, she's in front of Judge Williams, who finally allows her to have a bond. The amount is $15,000 cash. As best as I can tell, she stays in jail.

When her case is resolved in September 2004, she's sentenced to 12 months incarceration, apparently for the crime of not showing up in court when summoned on May 6, 2003. She's given credit for the nearly 12 months she'd already served at that point.